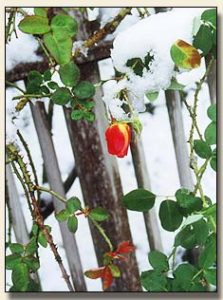 A traditional Japanese haiku includes a kigo or “season word.” To readers outside of Japan, this convention can seem trivial, even irritating. Why, they might wonder, do so many haiku sound like weather reports?

The answer is that the seasonal references can bring a lot of meaning to a small poem. As Haruo Shirane writes:

“In Japan, the seasonal word triggers a series of cultural associations which have been developed, refined and carefully transmitted for over a thousand years and which are preserved, transformed and passed on from generation to generation through seasonal handbooks, which remain in wide use today.

In English, we don’t have anything quite like the detailed associations that have developed around kigo. Charles Trumbull states the problem succinctly:

“Haruo Shirane has recently examined Japanese haiku along two axes — the horizontal, representing that aspect of the poet’s consciousness that addresses the present and speaks to his contemporaries; and the vertical, the haiku poet’s link to a historical, cultural, and literary past. Successful haiku, Shirane argues, must work along both axes. Locating a verse in the cycle of seasons has always been an important aspect of the vertical for Japanese poets. Much like the 5-7-5 syllabic shell of the haiku, however, the elaborate seasonal understanding that developed in Japan exports badly to the West. If we Western haikuists cannot fully partake of the seasonal system, what can we do to include the important vertical element in our own haiku? ” (2)

One approach to the problem of finding the vertical in Western haiku may be to include seasonal references, even if these references do not work on as many levels as they can in Japanese haiku. H.F. Noyes seems to suggest such an approach, while stopping short of of saying that a seasonal reference is a requirement:

“. . . A clear indication of season suggests a shared background of color, scent and sound. The big world of season simply overwhelms our ordinary small-minded preoccupations. But remember that what matters above all is that we achieve an expansive focus — that in the moment we’re living in a wide-open, inclusive world of awareness in which everything is viewed with a fresh impartial eye.” (3)

Noyes becomes almost mystical when he talks about “what matters above all.” Perhaps he is reminding us that the process for writing a good haiku is at least partly intuitive and cannot be reduced to a few rules.

Kigo and Form on the  Yuki Teikei Haiku Society site.

(2) Charles Trumbull, “Seasonality: English-Language Haiku In Search of Its Vertical,” Acorn, Supplement 1 (spring 2000), 10-30. This Supplement was entirely devoted to seasonality in haiku. See also his article The Importance of Seasons from the Haiku World site.