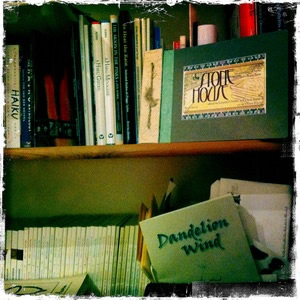 Here are some of our favorite books about haiku and related forms.

The Essential Haiku is a concise introduction to “big three” masters of the Japanese haiku tradition: Basho, Buson and Issa. I cannot speak to the accuracy of Hass’s translation from the Japanese, but the poems read well in English, and the reviews I’ve read do not find significant fault with the translations. When I compare Hass’s versions to other translations, I do not usually see big differences in the content of the poems, but to me, Hass’s versions consistently read better as as poems in English. Curious readers will want to seek out other translations of these poets, but to my mind, no book does a better job of introducing the depth and range of classical Japanese haiku in English.

The introduction and notes are a joy, as you would expect from Hass, a former Poet Laureate of the United States and a celebrated essayist.  One thing I find especially valuable about Hass is that he doesn’t overemphasize the foreignness of Japanese haiku. He enables us to see their universality in a way that specialized commentary sometimes does not.

To Make a World: One Hundred Haiku and One Waka, by James Luguri (1987). Privately and posthumously published.

In 2005, while looking for something else in the back issues of The Christian Century, I first learned of the existence of what’s become one of my favorite books of haiku, To Make a World: One Hundred Haiku and One Waka by James Luguri. In an appreciative essay from May 1987 simply titled “James Luguri’s Haiku,” John E. McEntyre, a colleague of the poet, noted that Luguri had collected his haiku and a waka in a manuscript before he had died. Using those clues, I found and purchased a copy of the small posthumously published paperback from an online bookseller. The book’s one-page biography of the poet provides only a few details:

A native of Lindenhurst, Long Island, James Luguri left home at the age of thirteen to enter a Carmelite community. After ten years he left the order and completed his education in Berkeley, California, receiving advanced degrees at the Graduate Theological Union and the University of California. A teacher by profession, he taught at various institutions and at various levels, from junior high through graduate school and adult education. His principal forms of expression were haiku and aphorism, although he also wrote many longer poems and translated several works of Rainer Maria Rilke. On April 23, 1985, at the age of 38, he collapsed and died of a heart attack while jogging. At the time of his death he was on the faculty of the Franciscan School of Theology, in Berkeley, teaching in the area of theology and the arts, and also on the faculty of the Department of Religious Studies at St. Mary’s College, Moraga.

I enjoy reading and rereading the poems in To Make a World, which is arranged by the seasons. One inconspicuous haiku (number 23 of his 25 spring poems) says in its own way, at least to me, “Do not be anxious about your life.” For a few thoughts on that haiku and excerpts from To Make a World and The Christian Century essay, click here. By the way, the book’s main title ends line 4 of James Luguri’s waka, which is also included in the linked piece.