The Longest Time: Haibun and Essays by Richard Straw 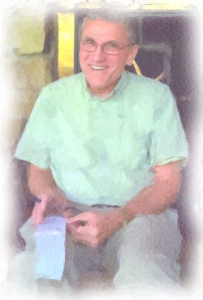 Richard Straw has been a steadfast contributor to the North Carolina Haiku Society for decades. I first met him in the late 1990’s, long after he had been editor of Pine Needles, the first newsletter for the Society. Richard has been there for most of our meetings and events. He has made many valuable contributions to our projects.

Recently, Richard published a new edition of his collection of haibun and essays. This collection is available for download from The Haiku Foundation’s Digital Library: The Longest Time – Haibun and Essays.

From the foreward by Patrica Prime:

“Straw’s opening line to the succinct haibun “First Impressions” exemplifies the ethos behind this collection. Memory, confrontation, and deconstruction: this is a book laden with possibilities and the permutations and permeations that result from the memories of a lifetime. So often these haibun arise out of an engagement with the personal and the landscape, real but also charged with poetic diction.”

From “Haibun: It’s a Family Thing,” one of Richard’s essays in the book:

“A haibun is a family gathering, perhaps a reunion, of young and old and middle aged. Some dads huff prose and some cousins whisper poetry and some sons and daughters do a bit of both or talk gibberish like an uncle through his beer and mustache. All are interacting, replaying old lines, trying new routines, listening to each other, or sleeping in front of the TV, the butt of a face-painting prank. The prose members and the haiku members can say the same lines elsewhere in another setting, such as in a formal gathering of poems or in a critic’s selective review. Words voiced separately may even gain some acclaim and applause. Although what’s said in nonfamily settings will sound similar to what was said before, it will have a different meaning, a loss usually of context. Outside the haibun family and its relationships, the family members will have different personalities, none perhaps as dynamic as what they share with those who also have similar lips and eyes, tones and intentions.

end of summer
another family
in my old home”